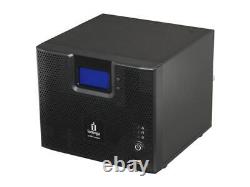 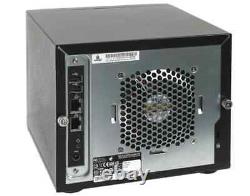 IOMEGA STORCENTER IX4-200D EMC NETWORK ATTACHED STORAGE NAS 4TB. Iomega's StorCenter ix4-200d has four disk bays with slide out trays. To access them you have to unscrew and remove the entire three-piece top panel instead of simply opening an easily accessible front door. Removing the panel isn't difficult, but it's an odd design choice.

The StorCenter comes with four 1TB hard disks fitted - a massive amount of storage - and can be configured as either RAID 5 or 10. It wasn't quite as blisteringly fast as we would have liked given the StorCenter's high price, but it's still quick no matter which RAID level we chose.

Commonly used tasks are gathered together on the home page. Creating user accounts and assigning them different access permissions to different folders is easy. The process could be more streamlined though, as the controls for organising them into groups and assigning them quotas are hidden away on a different screen which isn't obvious.

Bizarrely, shared folders can't be password protected until an option in another screen is enabled. The StorCenter has some features not found on NAS devices from other manufacturers. It can copy photos from digital cameras and Bluetooth-equipped mobile phones but, despite the price, Bluetooth isn't built-in so you have to plug a Bluetooth adapter into one of the three USB ports. Photos can also be copied from cameras that support Picture Transfer Protocol (PTP). The transfer starts automatically when the camera is connected to one of the StorCenter's USB ports and photos are automatically sorted into folders according to the date they were shot. All files, not just photos, can be searched by keyword from the web interface although you're better off using a dedicated search tool such as Google Desktop. We had no trouble using the StorCenter to share the contents of a USB disk or a USB printer across our network. It also worked well as an UPnP media server and iTunes music server. BitTorrent-hosted files can be downloaded without the aid of a computer, but the download management controls are part of the main management interface. This isn't ideal if you want to give users the ability to manage downloads, but don't want them altering all the other settings.

Iomega's StorCenter ix4 is a fast and feature-packed NAS. All items are dispatched from our warehouse in Melbourne by Australia Post. System Technology Services provides the best quality service and parts for your mobile electronic needs.

We also provide replacement parts and repair services for laptops and home computer systems, wither its hardware or software issues. We also replace LCD screens for a wide range of mobile brands and models, with either Genuine or High Quality Aftermarket Parts. We also provide a wide range of Bluetooth electronics such as wireless headphones or wireless Bluetooth speakers. Come in-store and select one from our great variety that suits your needs. STS also supplies CCTV and Alarm systems for your home or business, come in-store for more information.

Don't just stop with a screen protector, install a protective case also, we have a great variety to choose from. "Only High Quality, Only Happy Customers". This item is in the category "Computers/Tablets & Networking\Drives, Storage & Blank Media\Hard Drives (HDD, SSD & NAS)\Network Attached Storage".

The seller is "stsbiz" and is located in this country: AU. This item can be shipped worldwide.